Popular Columbus Blue Jackets mascot Stinger will be among the honorary starters at the NHL All-Star 5K Race on Saturday, Jan. 24 at Nationwide Arena.
Stinger will be joined on the Start Line by the Pittsburgh Penguins' Iceburgh and Carlton The Bear of the Toronto Maple Leafs. read more » 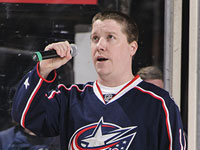 Leo Welsh, the popular national anthem singer for the Columbus Blue Jackets, will bring his signature version of the Star Spangled Banners to the NHL All-Star 5K on January 25 at Nationwide Arena. read more »